skip to main | skip to sidebar

got a glimpse of the future, focusing on the impact of technology on learning, during the inaugural “Everything is Alive” discussion sponsored by the Redding Educational Foundation. The live broadcast via Cable Channel 79 featured Beyond Real Time blogger and technology futurist Bob Moran with Director of Learning Technologies for JetBlue Airways, Murry Christensen. Filmed on location at the Redding Community Center, the broadcast was produced and directed by Martin Hara of MHX Design with technical direction by Chris Helland of MavCo,.

Mr. Moran opened the presentation with a brief projection of technological change over the next 30 years. By 2027, he predicted, pervasive computing and neural networks could change our world beyond recognition. Next, Mr. Christensen offered his insights into learning trends that have followed closely behind advances in our technology. The presentation then shifted into an animated round of conversations with venture capitalist Steve Smith spontaneously invited to the stage to share his views on learning. The three men broached topics ranging from “self-directed learning” and “quantifying quality education” to the “semantic web,” an array of new technologies aimed at making the Internet function more like the human brain. 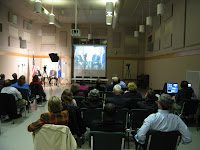 “People will look back on our time and say we built the nervous system for the planet,” Mr. Christensen said, referring to infrastructures like dust-sized computers and radio-frequency identification now being developed to enable devices to “talk to each other and to us.” Mr. Christensen went on to say, “In such a changed environment, students will need to become more skilled in finding answers for themselves.”

In contrast to traditional models of teaching like pedagogy, in which children receive guidance from an authoritative instructor, and androgogy, in which adults engage with an instructor-colleague in the classroom, Mr. Christensen described the emergence of “autogogy,” a system of “radical self-sufficiency in learning” where students are given informative tools but must decipher the problem and solution on their own.

“Educators have to think about becoming editors, not leaders,” Mr. Christensen said. “We need to teach people how to learn, not to learn any specific body of knowledge.”

Some teachers and administrators in the audience understood that the gap between Mr. 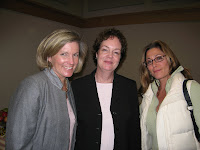 Christensen’s vision and the state of public education today looms large. While technology has made it possible for Redding students to chat with fellow learners in Asia or to remotely control a telescope at a nearby observatory, “it is still up to teachers to frame the challenge for that day’s class,” said Sandra VanAusdal, a language teacher at Joel Barlow High School.

Although the emergence of pervasive new technologies poses a serious challenge to the way we experience and learn about the world, there was a broad consensus that humanity also had the enormous potential to change and recreate its future. 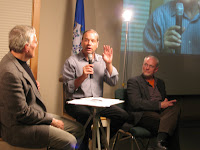 “Human beings, as a species, have been adapting to new technology for millennia,” remarked Regional School Superintendent Allen Fossbender. “The logical prediction is that we will adapt to the changes created by technology, mostly for the good.” With some qualifications, Mr. Moran agreed: “If people are willing to learn how to make change an ally [then] together we can make good things happen.”

The Future is NOW

When we are present to the scope and depth of change in world today, we can be empowered and responsive to the challenges of our Future. Education is a life long commitment for everyone of all ages. When is the right moment to act and to make a difference? ....the future is NOW!